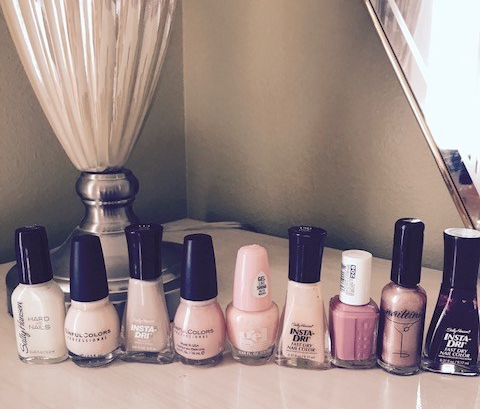 For some people minimalism comes naturally. They easily remember to remove what is not needed, used or loved and their space is always organized in a way that thoughtfully showcases only their most precious possessions. They also don’t keep bringing clutter into the house.

Last December I did a clean sweep of my entire house, room by room, and posted about it on my blog here. But here I am six months later and I’m beginning to feel that I may need some “Minimalist Maintenance”!

I’ll be posting weekly the different areas that I am pruning down, and this week is a small project: Nail Polish.

To be fair, I think a large part of the reason why I feel I could use some maintenance is not because I’ve brought in a whole bunch of things, but because what I realized when I spent the large part of this Saturday cleaning out my room was that I was ready to part with things that I wasn’t ready to part with six months ago. Suddenly I was ready to throw away, donate or sell jewelry, clothes, makeup and other cosmetics. I had absolutely no plans on doing this; I started with my nail polish and from there it kept going.

I didn’t have a ton of nail polish but the way they were thrown into a big makeup bag made it a pain to see the colors clearly and quickly. Plus, it was obvious that I needed to organize them because I found this: Two clear polishes from the same company. I remember buying the second one a couple of months ago because I couldn’t find the other one even though I was sure that I still had some left.

After some humming and hawing, I separated what I was going to keep and what I was giving away. All of the ones that didn’t suit me, never used, or didn’t like the formula got the boot:

And now I am left with a small variety of polishes that all fit snugly inside of a small makeup bag that was previously not being used: Now I can see exactly what I have so that I don’t have a repeat of purchasing anything twice and I’m excited to use some colors that I haven’t in a while. I also was able to use the bigger makeup bag for my actual makeup storage, which really needed it more than my nail polish did.

This small project was a great way to motivate me to tackle other areas that would require more thought and care like my clothes and jewelry. Next week, I’ll post my jewelry maintenance. I’m very proud and excited about the new way I’ve organized it all!